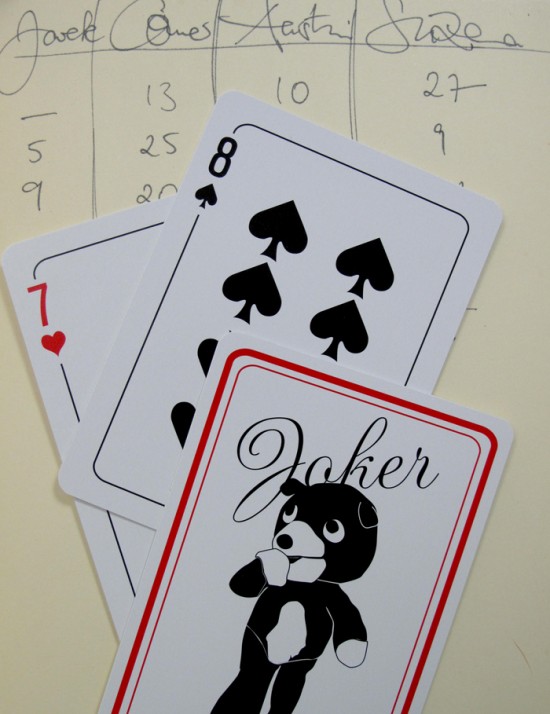 My brother and I used to play this German card game with my grandmother and our uncles. It’s called “Mau Mau”- I have memories of playing it evening after evening…exactly what we did around here this winter.

Rules: The game is played with a regular deck of playing cards. The players are dealt each a hand of cards- in my family we start with 7.  The rest are placed face down as the drawing stack. At the beginning of the game the topmost card is revealed, then the players each get a turn to play cards.

One can play a card if it corresponds to the suit or value of the open card. E.g. on a 10 of spades, only other spades can be played or other 10s. If a player is not able to, he draws one card from the stack. If he can play this card, he may do so, otherwise he keeps the drawn card and passes his turn. If the drawing stack is empty, the playing stack (except for the topmost card) is shuffled and turned over to serve as new drawing stack.

The three cards you want to draw are: the 8s, the 7s and the most cherished Joker.  8 makes the next player sit out a round, 7 makes him take two extra cards-and the Joker trumps all and can be used as anything ( like a shape shifter- my strategie is to keep him for last.)

Once you are to lay down your second last card you must say “Mau!”

Now you will be all hopeful, thinking that you are almost there, almost won-but in that last round all kinds of twist and turns can happen. You might not be able to lay down your last card because its not a match. Or the player before you handed you a seven….Too bad. I have gone from one card back to holding three or four in the matter of a couple rounds. Should you be lucky and get to lay your last card down first, you are the winner and must say loud and proud: “Mau. Mau.”

Everybody else counts what they have left in their hand and the next round begins.

We play it here with two “Binth Joker” playing card decks to heighten our changes on getting, well, a Joker.

I am the founding partner and Creative Director of Design Collective BINTH and the mother of 13 year old Jarek. I grew up in Germany. I have been in the creative field all my life. My blog is about people I meet, things that inspire me, places I go and all that is happening at BINTH Studio + Store.
View all posts by Suzanna →

This blog does express only my personal opinion. It does not reflect any views or opinions of FCB.